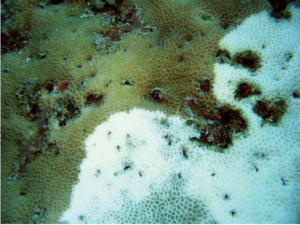 My final geography class of 2018 concluded with a discussion around coral reef bleaching, and the ramifications of climate change on the Earth’s aquatic life. This discussion really inspired me to learn more about the science of climate change, and in particular, the impact it is having on coral reef structures and populations. It is my hope that this blog will educate you on the importance of coral, and the science behind why massive amounts of these creatures are dying.

To start, let’s look at what coral actually are. Coral are “invertebrate animals belonging to a large group of colourful and fascinating animals called Cnidaria”. There are two types of coral: hard and soft. Just like their names suggest, hard corals contain a hard rock-like chalky skeleton while soft coral lack this feature. Instead, soft coral, like sea feathers and sea whips grow wood-like cores for support and fleshy rinds for protection. In order to form their outer shells, hard coral “extract abundant calcium from surrounding seawater” and use that calcium to form a hardened structure for protection and growth.

All coral contain a structure called the polyp. The polyp resembles a tin can open at one end of the creature containing digestive tissues. This end has a mouth surrounded by a ring of tentacles, which the organism uses to capture and digest smaller organisms. Learning about this part was really interesting because I never knew coral had mouths before! As well, micro algae called zooxanthellae living within coral structures provide them with color and nutrients, created through photosynthesis. 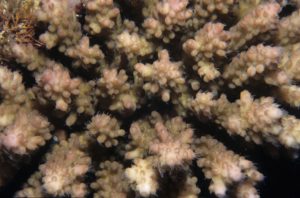 These sea creatures congregate to form coral reefs, which house 25% of all marine species. This just goes to show how important coral are in aquatic ecosystems, and the survival of various species of sea creatures.

Climate scientists all over the world have brought to light information on one of Earth’s most destructive challenges: global climate change. The phenomenon of rising global temperatures can be attributed to increased greenhouse gas emissions, which have trapped the heat from insolation within our Earth’s atmosphere. This has caused great damage to human populations all over the world, and even coral structures under water.

The science behind coral bleaching can be explained by the increased temperatures of water bodies. When water temperature strays from the ideal homeostatic conditions of coral, these creatures “expel” the living algae within them. Since this algae controls the coloration of these organisms, we start to see coral “bleach” or whiten as the algae escapes coral tissues. Often, coral bleaching is soon followed by coral death, because the algae provide nutrients to the polyp, in order to keep the organism alive, and when it leaves, the coral is essentially strangled from the inside out.

The implications of mass coral deaths is definitely worth talking about. Coral skeletons, comprised mainly of calcium, are used to create calcium supplements to treat multiple sclerosis and to prevent chronic conditions such as cancer and heart disease. Not only that, but surgeons often use coral products for growing new bone structures in reconstructive surgery, cosmetic facial surgery, and when treating trauma patients. Sadly, marine scientists predict that that “90% of the world’s coral reefs will die by 2050.”

If this prediction turns into reality, the world will not only suffer major losses in the fields of medicine and healthcare, but will also feel the impacts of mass extinctions of fish and other marine creatures. Unless we all recognize this as an issue and actively seek to learn more about how to take action to restore what has already been lost, life on Earth will quickly become more challenging and unsuitable for generations to come.

I hope you have gained some new knowledge on the biology of coral, and how climate change is actively harming reefs around the world.