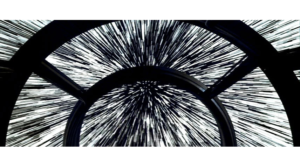 The rate of change in acceleration is called jerk. It is the third derivative of position. Jerk is calculated by dividing the change in acceleration of an object by time. On an acceleration/time graph, jerk is the slope in the straight line on that graph. On a velocity/time graph, jerk would look like a curved line. Jerk is a difficult concept to imagine. A way to think about it is to picture a driver of a car stepping halfway on the gas pedal for a second and then stepping fully on the gas pedal. The car starts out accelerating slower and then changes to accelerating faster.

The fourth derivative of position is called jounce. As you may have guessed already, jounce is the rate of change in jerk. It is calculated by dividing the change in jerk of object by time. On a jerk/time graph, jounce is the slope, and the line will be straight. On an acceleration time graph, jounce would look like a curved line. Jounce is almost impossible for us humans to imagine and is only rarely used in practical physics. It is more of a value that physicists play around with just for the sake of doing theoretical physics.

The next few derivatives are truly not applicable in practical and tangible physics and are considered a kind of “joke” in the physics world. Their names prove this. They are known as crackle, pop, lock and drop (in ascending order).

I enjoyed my adventure of discovering the names and uses of some of the higher derivatives of position after velocity. My teacher did not believe me when I told her about crackle, pop, lock, and drop, but was excited to hear that I was so invested on this topic!