Have you ever found yourself lighting up the dance floor with the robot dance? Well, chances are that this dance requires one to move in very straightforward and one-dimensional movements, making it seem as though motors are spinning and stopping. Upon further inspection of this dance, I wondered why robots have to move that way. As I was on Curiosity.com looking at some articles regarding robotics, I came across an article that explained the reason why building prosthetic replacements for legs and arms are so difficult. Not only is fluid motion difficult to have with motors and gears, but the number of legs/pivots touching the ground also has a lot to do with how the robot will function.

When it comes to robots that stand up on a certain number of legs, it is much more common for the robot to come tumbling down to the ground than to be able to maintain balance. Obviously, exceptions include C-3PO from “Star Wars” and Optimus Prime from “Transformers.” To bypass this design challenge, many robots being designed and built today are made with 4 to 6 legs. What is the reason for this? As I found out, evolution has a significant role in connecting the stability of robots to the stability of humans. Since it took quite a long time humans to look the way they do, it will take roboticists quite a while to break the issue of the instability of robots, and to build a true copy of a human.

Humans belong to a group of mammals called primates, and only humans, out of the other three species of primates, walk upright. The other three hop on two legs, just as kangaroos do. Animals that walk on 4, 6, or even 8 legs are much more common in nature, and this is for the better. Animals with at least four legs is in a sense the minimum for nature to possess a stable object. An example of this is in a table. There is not such thing as a two-legged table due to the fact that it can easily fall towards one side. Having four or more legs makes the table much more sturdy, which complements how animals with a greater number of legs tend to be more stable.

Thus, when you begin to build a two-legged robot, you are already at a disadvantage in terms of not have stability. When building a robot that tries to copy human movement, the first thing you need is the ability for the robot to stay up. Humans maintain their balance through a complex system of kinesthetic awareness and proprioception that works together to control more than 600 individual muscles. Although sensors such as gyroscopes and accelerometers are able to judge spatial awareness of a robot, their advancements are nowhere close to matching what’s in the human body. Along with this, motors that are being used on robots about the size of the average human are not as strong or efficient as human muscle. The resulting factor of slow motors with spatial sensors that are not as accurate is a bipedal robot that is weak and lumbering.

Roboticists have been using “tracked” robots that are built on a wheel chassis for decades, as they traverse areas better and more efficiently. However, four-legged robots are making bigger advancements that two-legged ones, due to the ease of build. But is spending energy on making a humanoid robot important? According to roboticists, the answer is yes. Unlike cats and dogs that have trouble opening door knobs and walking down stairs, walking upright gives humans the ability to do other tasks with the other two limbs available. Furthermore, walking up and down stairs becomes much easier when there are only two legs that your brain needs to worry about. Thus, if there were to be an emergency earthquake, nuclear meltdown, or another disaster, a humanoid robot will be the most efficient to navigate the area to help.

Although it may not seem like it, there have been a few organizations that have gone one step closer to building a fully humanoid robot. In February 2017, Agility Robotics presented the world one of the most bipedal robots ever. Named, Cassie, this robot has no head nor arms. However, its knees are reversed to make it walk like a bird. However, due to spring loaded systems and knee reinforcement, it is able to walk at a pace of three metres per second.

Ultimately, I have always believed that robotic technology will be the epitome of having tasks done efficiently, and humanoid robots that are able to traverse an area just as efficiently as us will mean that robots can help us in a broad range of areas. Even though the current iterations of robots are not up to this standard yet, it is important to give roboticists time. Eventually, just as in evolution, it’ll take roboticists more than a few decades in the garage to make a convincing, stable, two-legged robot that can do tasks just as humans do. Who knows, maybe the rise of robots is closer than we think… 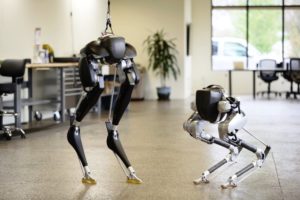