A few days ago, I decided to take carrots to school as a snack. As I was munching away, I wondered if the carrots I was eating were grown and produced in the same way that their carrot ancestors had been. Wanting to learn more, I decided to research the history of carrots. 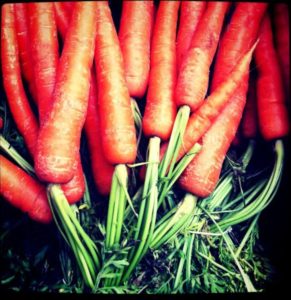 Recently, researchers have sequenced the carrot’s genome and, through their sequencing, they have developed an explanation of the carrot’s hue that we know and love today. To understand a little bit about the carrot, it’s important to take a look at its ancestor, the Daucus Carota. The Daucus Carota is noted for its variety in colour from a pigmentation of yellow, blue to purple, pink to red or white with white small roots. With all these different coloured carrots, you may be wondering how the carrot became orange in pigmentation. Why are modern day carrots orange? Some believe that the change in carrots’ pigmentation was for political reasons.

In the 17th century, Dutch farmers were said to have grown orange carrots in honor of William of Orange, a leader who strived to gain Dutch independence. This orange colour ,unlike its ancestral colours, is the result of a high concentration of pigments called carotenoids which make it extremely rich in Vitamin A.

The research team ended up finding the source of genomes of the beloved Nantes carrot. In addition, the team sequenced over 35 different carrots in the Daucus genus. Their findings – 10,530 genes are unique to carrots out of the 32,113 genes in the genome. Also, the team classified two genes that potentially have a role in the change in pigmentation of the carrots. The two genes – the Y gene and the DCAR_032551 gene which are responsible for the colour of the carrots.

In conclusion, I learned a lot about carrots through my research and that we should take some time out of our lives to learn more about things that we take for granted.