Over the summer, I received the really unique opportunity of getting to learn about and explore the Asulkan Glacier in British Columbia’s Glacier National Park.  The expedition gave me the chance to learn about one of the most highly discussed landmasses when it comes to climate change and global warming: glaciers. I realized that prior to my journey, my knowledge about glaciers was quite lacking, even with their great importance to human beings and the world as well as recent media coverage. It was extremely interesting to learn about the different features and types of glaciers, but what stood out to me the most were the impacts glaciers have and could possibly have on the world.

Before I mention some of the facts regarding the importance of glaciers, it’ll be helpful to know exactly what glaciers are. 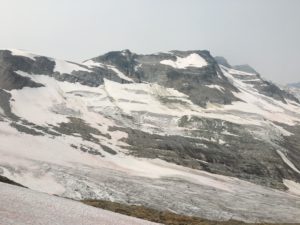 So first things first, what is a glacier? While some people might call any large amounts of ice and snow they see a glacier, there is actually a specific criterion that needs to be met in order for something to be classified as a glacier. Glaciers are gradually formed by unmelted snow that has piled up year after year.  Eventually, when enough snow has piled up, a certain amount of pressure is exerted on the snow at the bottom of the pile and it is compressed into ice.  What makes glaciers special is because of their vast size, glaciers actually move and flow.  They are not stationary landmasses and instead shape the land around them, which is just one way they impact Earth.

If you still aren’t sold on the importance of glaciers, these facts may persuade you to reconsider. According to the National Snow and Ice Data Centre, glaciers currently cover 10% of Earth’s surface, which is a pretty significant number.  Even more important is the amount of freshwater they contain.  Glaciers contain 75% of all the freshwater on Earth, making them the largest store of freshwater in the world. I found this fact to be both surprising yet unsurprising at the same time because glaciers are quite massive in size and mainly consist of frozen water.  Many communities around the world such as the ones located near the Himalayas and in places like Bolivia and Switzerland depend on glacial water both as a source of drinking water as well as watering crops. Since the water that comes from glacier melt is able to flow quite rapidly, countries in Europe and South America, as well as Canada and New Zealand, have been able to harness the rushing water into hydroelectricity, a renewable way to obtain energy.

However, in recent years, glaciers have been retreating and their sizes have been shrinking noticeably.  When I was at Glacier National Park on the Asulkan Glacier, there were very visible signs that the glacier’s mass has decreased, such as where the vegetation grew.  Past maps of the Asulkan Valley area showed where the glacier’s borders had been when the map was created. When I looked at the map and used a GPS and ruler to scale and pinpoint my location on it, I found that the area I had been standing on (which were a pile of rocks) was actually part of the glacier on the map.  From the time the map had been made to when I visited the glacier, the glacier had actually receded and left rock behind. This was really eye-opening and a little scary for me because I witnessed a direct impact of climate change and the warming of the planet. I’ve heard about glaciers melting many times on the news, but on my expedition, I was forced to face the reality of it.  This is actually happening and unfortunately, denying or ignoring it won’t make the problem go away.

Glaciers are necessary for human beings. Without them, we would lose the majority of our drinking water, which is vital to our survival.  Another catastrophic result that we have already begun to see is the rising of sea levels. According to National Geographic, if all the ice on Earth melted, sea levels would rise 216 feet (65.8 metres) and countries all over the world would be flooded or submerged in water.  To me, that scenario is unfathomable and yet there is a possibility that one day it may happen.  It might not be during our lifetime, but that does not mean that it is any less our problem to deal with. If we want to continue to thrive as a population, we need to protect these truly majestic and breathtaking landforms and make sacrifices, so one day, it is not future generations being sacrificed.