When I look up at the night sky and wonder upon where we are in this vast pocket in the cosmos, I find it is the simpler questions that yield the more complicated answer. Many may be aware of the theory of the expansion of the universe. However, there is still much to discover regarding the complexity that this topic has to offer. For example, many have not thought about the fact that the expansion of the universe can only exist if there is anything to expand to in the first place. Questions like these offer tons of possibilities in terms of creativity and imagination, which will help lead future generations towards solving more problems. 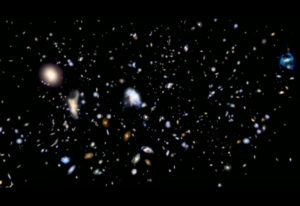 First of all, it is important to state how, and why the universe is expanding. Astronomers have proven this phenomenon by the Doppler Effect. When you hear an ambulance behind you, its siren is heard at a different frequency than when it is next to you. Similarly, light also has a Doppler Shift in which its frequency is changed based on its distance from the person observing it. Astronomers are observing that galaxies have a redshift in them, meaning they have a reddish color to them. This means that the light waves leaving the galaxies are being elongated or stretched to a red color on the electromagnetic spectrum. Thus, the only reason why this would be happening is due to the expansion of the universe.

The short answer to this seemingly impossible question is as simple as the universe is everything, so it isn’t expanding into anything. Although the galaxies are moving away from each other, there is no real center to the universe, and no real edge of the universe either.

However, this is where things can get slippery. Just because the universe does not have an edge, it does not mean it is infinite. To understand how something with no limitations can still go on forever, use an analogy of a balloon to represent the very fabric of the universe. Think of a tiny being on a surface of a fully blown balloon. As the being keeps moving around the balloon, it seems as though there is no end to the balloon. However, there will still be a finite volume in the balloon. Oddly enough, this analogy could be used with our planet, as well.

Before you begin to scratch your head, it is actually not difficult to think of the universe as a flat landscape. For example, think of a piece of paper. By taking the two opposite sides and folding them, you would just turn the flat piece of paper into a cylindrical object. A two-dimensional rocket could travel anywhere it likes, and it would never encounter an edge or barrier – even though the paper will always have a finite volume. However, some might say that creating a curve in a paper is shaping it into a spherical object. But, there is a special scientific meaning that defines the word “flat.” When scientists mention this word, they mean “Euclidean,” which translates to parallel lines running parallel and the sum of angles in a triangle always summing to 180 degrees. Although this rule does not apply to spheres or hyperbole, it does on a cylinder and any other shape that can be formed by a piece of paper.

At this point, you may be wondering, why this has an impact on us and potential research and astronomy in the future. Living in a flat universe opens up the possibility of traveling in one direction for long enough to be able to end up where you started. In addition, telescopes could be aimed in a certain direction, and we could see ourselves – either in the future or past. Furthermore, by visualizing other abnormal shapes in the universe, potentially seeing mirror images of us or other versions of us could be a possibility in the future. I personally feel that with this knowledge of a finite universe, we can begin to think beyond our “edges,” and ponder over what lies after the edges. Although the human race may never make it out of our galaxy, nothing will stop our minds from trying to think beyond our borders.

To conclude, the importance to humanity on this topic may be more relevant in the future. However, for now, it is important to make sure our generation is aware of these complicated, yet straightforward questions. If we can all begin to ask “the next question,” then the future of humanity will be in good hands.