People all around the world ring in the new year with a wide variety of festive celebrations, often including fireworks! Even if you don’t go see the show, you can probably hear the display booming across the city leading up to midnight. As 2018 came to an end, I listened to the cracks and pops from outside my window, and I began to wonder. How do fireworks… work? 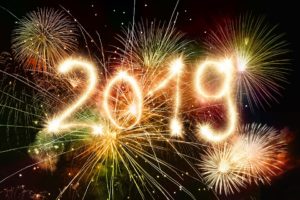 There are a wide variety of fireworks available for purchase, but I’ll be focusing on the most popular and most recognizable, the aerial firework. An aerial firework is made up of 5 main parts: the stick (what keeps the firework moving in a straight line), fuse (what ignites the main part of the firework), charge (an explosive designed to shoot the firework high into the air and away from spectators), effect (what makes the colourful explosion in the sky), and head (the pointed tip at the end of the firework that contains the effect(s)).

Put simply, an exploding firework is just a bunch of chemical reactions. The gunpowder contained in the firework is made up of fuel and an oxidizer. Fuels are molecules that contain lots of energy in their chemical bonds. Oxidizers are the molecules that help break these bonds to release the energy. Adding heat to the fuse causes enough activation energy (the minimum amount of energy that colliding particles need to elicit a reaction) to set the firework off into the sky!

The colours in the explosion can also be explained by chemistry. Metal salts are compacted into the fireworks’ effect(s). When adding extreme heat to any metal, it is normal for it to glow an intense colour. This is essentially what happens in a firework explosion; different metal compounds produce different colours. Sodium compounds are yellow and orange, copper and barium salts show green or blue, and calcium or strontium make red.

From a physics standpoint, fireworks are just as explainable. To explain the gorgeous symmetry of aerial fireworks, we can look at the conservation of momentum. This law states that the momentum of a system will be constant given that there are no external forces acting on it. In other words, the quantity of motion must be equal on each side of an explosion. Wind often acts as an external force that affects the balance, but at the time of the explosion, you can be assured that it is symmetrical.

Physics can also explain how a firework shoots up into the air in the first place. According to Newton’s third law, for every action force, there is an equal and opposite reaction force. The same way a rocket blasts off the ground, the powder in the charge burns, emitting gases that shoot out of the back of the firework. The gases exert a force on the firework, which in turn, exerts a force on the gases. This reaction force sends the firework off into the sky!