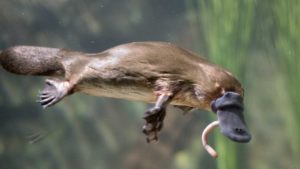 Most humans and animals have five senses. The five senses consist of smell, touch, taste, sight, hearing. Unbeknownst to many, there are a few animals in the world who have more than the five senses. Out of the few animals, the duck-billed platypus has a unique sixth sense.

To those who are unfamiliar of what a platypus is, they are often commonly described to have the bill and webbed feet of a duck, a tail of a beaver, and the body shape and fur of an otter. In addition to this, similar to birds and reptiles, when reproducing young platypuses are also one of the few mammals on earth to lay eggs (commonly called monotremes). Despite their strange physical and reproductive traits, their sixth sense is what truly makes them stand out.

When platypuses move in the water, they are able to detect objects with their eyes, ears, and nostrils closed. In spite of shutting down three senses, platypuses are able to move smoothly because of their bills. As they waver from side to side near the ground, they activate their sixth sense which is called electroreception. This is when their mechanoreceptors (like touch receptors) on their bill are able to detect electrical charges from objects. The sensors on their bill help the platypus to detect electric fields and movements which are quite useful when hunting for food. In simpler words, their sixth sense works similar to our sense of touch. However, instead of being stimulated by small electrical charges given off by objects, humans have touch receptors. So, when we touch an object the touch receptors send signals to the brain what we are touching.