You are here: Home / Physics / Ever Heard about the Holes of Youth?

Ever heard of the fountain of youth, the magical water has not yet been discovered but there might be another way to achieve the same thing – black holes! 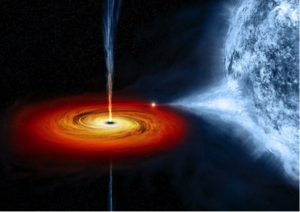 Black holes have been present from the dawn of time. Once the big bang happened not only were planets forming, however, black holes as well. Nasa stated that black holes can be formed when a star explodes which is called a supernova. Black holes are found with high tech equipment. Another indicator is the stars. When a few stars in a area behave different than usual than there is a black hole near. There are various black holes with diverse sizes. The smallest black hole is as heavy as a mountain.

The gravitational pull plays a major factor in time. It is the force that prevents humans from floating around and the farther the person is to it time speeds up. According to Nasa a black hole has gravity which is very strong. It is even stronger than the one of Earth’s. The closer the person is to such matter time slows down for them. If a person orbits around a black hole once and goes back home, 50 years have passed on earth making them incredibly younger. The gravitational pull on a black hole is incredibly strong that it doesn’t even allow light to get out hence it is undetectable.

Even though time can slow down it still doesn’t mean a person can live forever. A person can live longer, however, they will eventually age. Once they hit their average life expectancy around their eighties they will die.

Even though slowing down time doesn’t allow a person to live forever, this topic is very interesting and should be studied more since some people and especially I would love to live longer! With further research and development one day students can be taken on a field trip to orbit around a black hole.