You are here: Home / Biology / Autism in Dogs: Is it a Thing? 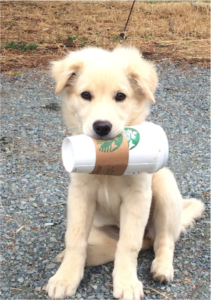 My aunt watched my lab mix, Luna, spin around our kitchen at an alarming speed for ten minutes. We were trying to pinpoint the cause of Luna’s uncharacteristic canine behaviours, and my aunt wondered, “Is it possible that she could have autism?” She voiced this idea and my family considered the question for a while, thinking about how Luna’s tendencies may mimic those of the people in our lives who have autism.However, we have only ever heard of and been exposed to autism in humans. So, does it extend to canines?

The Mayo Clinic outlines two main characteristics when diagnosing autism in humans: “Impairments in social communication and social interaction, [and] restricted, repetitive patterns of behavior, interests, or activities.” Although extensive research has been conducted for humans, veterinarians have only been looking into autism since 1966. At the American College of Veterinary Behaviourists, a presentation showed a possible link with tail chasing behaviours in bull terriers and autism. They were observed for traits and underwent a DNA analysis. Some common tendencies were trancelike behaviour, aggression, repetitive motor behaviours, and phobias. Some other traits could be dysfunctional interaction, lack of emotions, and a lack of activity. Even with these characteristics, it is still difficult to get a definitive diagnosis because of our limited knowledge of normal canine behaviour. One theory is that it may be caused by a lack of mirroring neurons in the dog’s brain, which means the dog does not have the same capacity to copy the normal behaviour of its parents and siblings.

After researching autism in dogs, I am still on the fence of whether or not Luna may have autism. She has exhibited anxiety, tail chasing, and fearfulness since she was a puppy, which coincides with the fact that dogs must be born with autism; it is not developed. However, she definitely does not show a lack of affection, emotion, activity, and shows no aggression. Due to its varying degrees of symptoms and severity, I think that she could maybe sit on the lower edge of the spectrum. She shows repetitive tendencies, such as collecting specific shoes every mornings; she cowers at the sounds of airplanes and wind knocking in the trees; and she has an extreme fear of pool noodles. In the end, with or without, she and all other dogs who exhibit the traits deserve all the love the world has to offer.