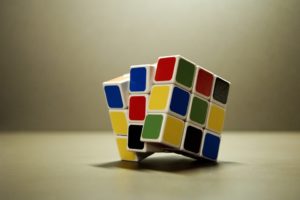 The reason why most people, including me, can’t successfully solve this puzzle, is that we are not approaching the problem a rubik’s cube poses from the right angle. We tend to make random and unnecessary moves, or to focus too much on a particular face of the cube, forgetting that our ultimate aim is to solve the whole cube.

This raises a further question: what is the least number of moves required to solve a rubik’s cube from any given position? After 15 years of research, we have found the answer: 20. This is now commonly known as God’s number, because it is believed that instead of using our inept methods, God would use the most efficient algorithm, God’s algorithm, which in the worst case scenario would consist of 20 moves, God’s number.