You are here: Home / Technology / Black Mirror’s “The National Anthem”: How the Public Uses Technology

Throughout centuries of literature and drama, people have created works of art that focus on issues within our society. With allegories such as “Lord of the Flies” by William Golding to reflections of our inner selves like Mary Shelley’s “Frankenstein,” no work is able to show the true effects of technology like Black Mirror. 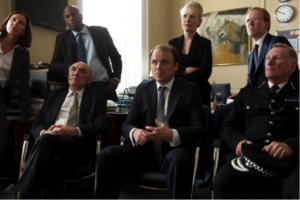 I first found this show while searching for something to watch on Netflix. With its beautiful cinematography and dark tone, I was immediately captivated by such a masterpiece. Inspired by shows such as “The Twilight Zone,” Charlie Brooker created Black Mirror as a science fiction show first aired in 2011 which meddles with the idea of new technologies, while also commenting on social issues. Each episode presents a new cast of characters with a new type of technology to explore, yet each episode is connected through hidden easter eggs. With a whopping 96 percent rating by Rotten Tomatoes, Black Mirror has captured the hearts of fans everywhere.

The Rundown of “The National Anthem”

The first episode, “The National Anthem,” immediately creates a dark scenario. When a royal princess is kidnapped, a ransom demand is made. Britain’s prime minister Michael Callow must appear on live television and, prepare yourselves, commit an act of beastiality and have sexual intercourse with a pig, or the princess will be murdered. Callow then faces this crisis with the advice of his peers, yet is eventually forced to comply with these demands. However, the episode ends by showing that his ratings as prime minister have increased a year later with his seemingly full recovery, yet his wife now views him with disgust.

Black Mirror: “The National Anthem” (The public watching the broadcasts)

How This Episode Portrays Society

With this episode, Brooker focuses on different aspects of technology. The first is the role social media plays in our lives. While the British government tries to contain this crisis, a video of the ransom demand is uploaded to Youtube. In a matter of hours, millions of people have seen the video, with so many copies being distributed that it is impossible to censor its contents now. This shows how easily news or rumors are spread on social media. The culprit realizes this, and uses social media as a tool to present his ransom to the entire world, trapping the government in his plan. With recent studies showing that 59 percent of social media users share information based on the title alone, Black Mirror shows how fast social media can spread both the truth and the lies.

Then, Black Mirror presents the idea of the public being too involved in the media to notice the reality around them. While so many people were sucked up by the news broadcast, no one noticed that the princess was being released in the streets. Everyone was so fascinated by the idea of witnessing history that no one was outside to actually be in the moment and change history.

While the “The National Anthem” carved a name for Black Mirror and presented ideas of the public using technology, specifically social media, it is not until the next few episodes that creator Charlie Brooker really presented ideas that questioned our dependence on technology. Although Black Mirror has some extremely bleak atmospheres and seriously messed up content, I urge everyone to at least give this show a chance, as it opened my eyes to new thoughts on both our society and technology.