You are here: Home / Biology / Uploading Your Blog Post at 11:59 PM … The Science Behind Procrastination

As I sat at home Sunday morning watching Grey’s Anatomy instead of writing my blog post, I started contemplating the act of procrastination. I am guilty of it, as you probably are too; but what exactly causes someone to procrastinate? How does one break the habit?

According to Timothy Pychyl of Carleton University, procrastination is “the gap between intention and action.” Procrastination is a negative inaction, as it has been proven that people who put off tasks experience higher levels of stress and a lower well-being. It has been said to be a lack of self-regulation, but there is debate whether it is due to poor time management or poor emotional regulation.

Piers Steels, a professor at the University of Calgary favours the time management theory. The 2007 issue of the Psychological Bulletin published Steels’ paper that states procrastinators will tackle pleasurable tasks first and will save the unfavourable ones for last. This evidence suggests that although the harder tasks generally take more time and effort, they will put them off, subsequently supporting the idea of poor time management. However, a study published in the 2000 Journal of Social Behaviour and Psychology supports the theory of a lack of emotional regulation. In the study, Pychyl noticed feelings of guilt and shame when participants put tasks off. This supports the idea that despite their negative emotions, participants didn’t divert themselves from procrastinating. 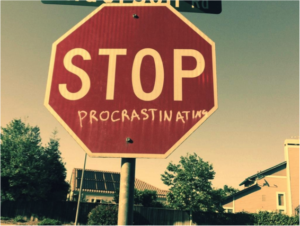 Addressing your time management or emotional regulation may seem overwhelming at best. Fortunately, those are just the root causes studied by social scientists. Most people, myself included, are not psychologists and simply want to stop themselves from putting off tasks until the last minute. Some effective tools can be to split tasks up into smaller chunks, setting personal deadlines, or finding positive meaning in a seemingly dreadful task. Personally, I find setting personal incentives effective, such as stating, “After this problem, I will go get a snack.” Some may not be food motivated like me, but find what works for you and stick with it. At the same time, the scientific significance has great value, so keep it in the back of your mind when you decide to ditch your blog post for Grey’s Anatomy.