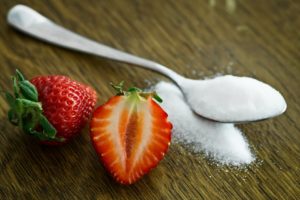 Sugar is a widely used sweetener in baking, drinks, and sometimes to sprinkle on toast. Millions of people seem to have an addiction to it, and this is because of our survival instinct. When we eat fruits, a moderate amount of dopamine is sent from the brain through several dopamine pathways, one of which affects reward-related behavior. This causes us to feel happy. Because sugar is refined, it is much more concentrated than fruit. Having a “fruit” amount of sugar is fine, but when sugar is consumed, our body goes crazy. Sugar is very refined so it stimulates our brains much more than fruit. “Overstimulation of the reward centers of the brain causes addiction.” When sugar is consumed, our brains release so much dopamine that our brains crave sugar and thinks that we need it. When being consumed at a regular basis and sugar is suddenly taken away from the diet, our bodies feel weak and our thoughts groggy. When sugar is consumed again, we feel energized, but only for a short period of time. Personally, I think that being in this “must have sugar” cycle would be terrible.

The fact is, sugar is hidden in everyday foods, even said “healthy” ones. Foods such as
breakfast cereal, soups, and even bread may contain high amounts of sugar. One way to avoid
the problem of having too much sugar is to check the sugar amount on foods. Just four grams of sugar is equal to a teaspoon! Consuming less sugar will result in longer lasting energy and
without the need of the sweetener to boost your energy. For me, sugar is addicting, but I will aim to have the least amount of sugar when possible.