You are here: Home / Featured Blog / One Giant Leap For Womankind 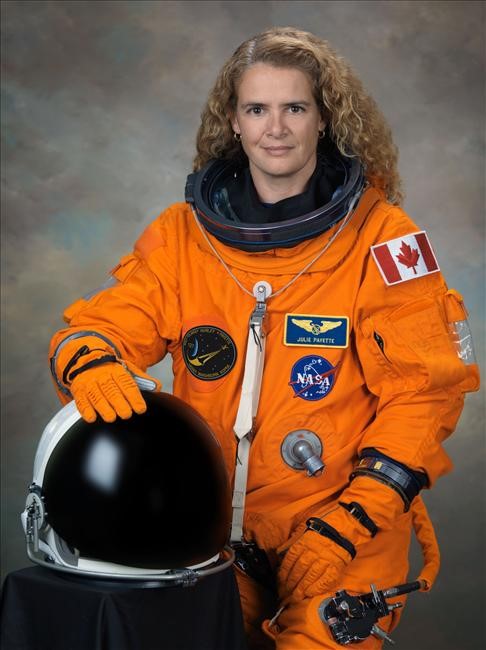 Ms. Payette had the opportunity to be in space not once but twice.  Her first mission went from May 27-June 6 in 1999 and was called the STS-96 (Space Transport System).  Along with 6 other astronauts from around the world, Ms. Payette boarded Space Shuttle Discovery that was launched from Kennedy Space Centre on May 27, 1999.  Three days into the flight, the shuttle landed for the first time on the well-known International Space Station (ISS), making Julie Payette the first ever Canadian to board the ISS.  In addition to other duties carried out at the ISS, Ms. Payette was able to test out a Canadian contribution to space exploration, the Canadarm’s Space Vision System.

Ms. Payette’s second journey into outer space happened a decade later in 2009.  She was the flight engineer on Mission STS-127 aboard Space Shuttle Endeavour.  The mission was just over two weeks but a large amount of work was accomplished in that time.  Payette and the rest of her team finished the assembly of the Kibo Japanese Experiment Module, and she was able to utilize three different robotic arms, the Space Shuttle’s Canadarm, Canadarm2, and a specialized  Japanese robotic arm connected to Kibo.  On this mission, Julie Payette was the only woman aboard the shuttle.

I think it is very important to learn about Ms. Payette’s career in engineering and space because this field is still very male-dominated.  According to Engineers Canada, under 13% of all certified, practising engineers in Canada are women, even though over half the population of Canada is female.  In authorized Canadian universities and colleges, the number of women in engineering undergraduate programs makes up 20% of enrollments.  While this number has continued to increase throughout the years, I predict that there is a still a long way to go before we’ll see a smaller margin in the gender gap.

As a young woman interested in the sciences (although undecided on what to study), I have found that Canadian female scientists are lesser known compared to their male counterparts.  Before I learned about Julie Payette, if anyone asked me to name a Canadian astronaut, I would have said Chris Hadfield.  I wonder why I’ve always learned and heard more about remarkable male scientists when we have female scientists who are just as accomplished.  Julie Payette is one of those scientists.

To me, Julie Payette is an inspiration because of everything she has achieved in her life.  I am very proud to see a female Canadian engineer become the new Governor General of Canada because it is one step closer to narrowing the gender gap in science and in politics.  I have no doubt that Julie Payette will inspire and motivate girls across the country to pursue their interests in the STEM fields and become engineers, astronauts, chemists, or whatever they desire.  Closing the gap definitely won’t be easy, but it is possible.  Once upon a time, we thought space travel wouldn’t be possible and look where the world is now. Neil Armstrong, the first person to walk on the moon, once said, “That’s one small step for a man, one giant leap for mankind,” but I’m changing that a little to, “That’s one major step for a woman, one giant leap for womankind.”