You are here: Home / Biology / Neuroscience explains the popularity of the pumpkin spice latte 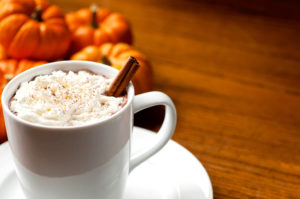 Fall is in full force, and so is the ever-popular pumpkin spice latte. First introduced by Starbucks in 2003, it has since made its way into our hearts as the quintessential fall beverage, with more than 200 million drinks sold since its debut. For many die-hard pumpkin spice latte fans, the seasonal drink is much more than just a creamy, sugary rush of nutmeg, cinnamon, and cloves. Its welcoming aroma is often associated with feelings of happiness and nostalgia, the prosperity of autumnal harvest, and a longing to spend time with family for the holidays. But why exactly does the smell of food items like the pumpkin spice latte become so inextricably intertwined with our emotions and memories?

The answer lies in our brains. We have five basic senses—taste, sight, touch, smell, and sound. Sensory input from the outside world is collected by sensory receptors located throughout the body, such as taste receptor cells contained in our tastebuds. Taste, sight, touch, and sound input are relayed to the thalamus, a pair of walnut-sized structures within the brain. The thalamus directs each of those four  types of sensory information being transmitted to the brain to their proper area in the cerebral cortex (the wrinkled, outermost layer of the brain) for further processing. However, incoming smell input is not relayed to the thalamus. Scents travel directly to the olfactory bulb, which begins inside the nose and continues along the bottom of the brain. The olfactory bulb is directly connected to both the amygdala and the hippocampus, two brain areas that control emotion and long-term memory. Simply by virtue of anatomy, smell has a more direct connection to our emotions and memories than any other sense.

The next time you mutter in annoyance while waiting in a ridiculously long line at Starbucks, breathe in deeply and try your best to enjoy the wonderful smell of nutmeg, cinnamon, and cloves in the air. The continued demand for the pumpkin spice latte suggests that it isn’t just another short-lived fad aimed at sugar-addicted tweens, but a comfortingly cerebral experience that anyone can enjoy.